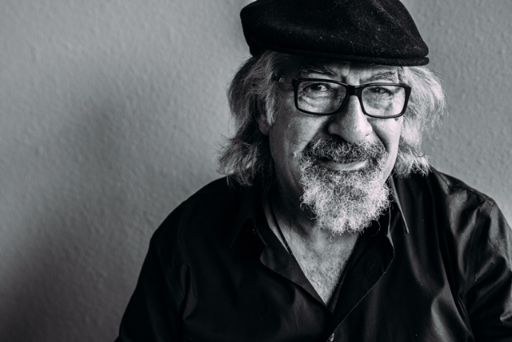 The creative soul and artistic style of IBRAHIM AL NASHASHIBI were formed in the old city of Jerusalem where he was born in 1950. His family roots are deeply embedded in old Jerusalem. Going back hundreds of years, his ancestors have been prominent citizens and have included well-known poets, writers, politicians as well as religious leaders such as a great grandfather “prince Nasser Aldeen Al-Nashashibi.”

AL NASHASHIBI earned his Law degree in 1972 in Beirut; he practiced law in the Gulf until 1986, then choosing a second home in San Diego. He established Fairouz restaurant, a family business, which has become one of San Diego’s best cafes for Middle Eastern food. His restaurant has become not only a gallery but also his studio.

The award-winning artist, AL NASHASHIBI, evokes a variety of emotions with abstract images and uses his creative art to convey his thoughts about key concepts in the lives of humans now and in the future. His creative use of acrylics, watercolor, ceramics, and murals expresses the images from within his soul. He uses a kaleidoscope of colors to reflect his view of people and life throughout time, and depictions of life in Jerusalem portrayed as the City of Love and as the Mother of Humanity.

As the seasons of life keep cycling he has developed more ways to express the joys, sorrow, gains and losses of life. With a book of poetry titled "Written with Color Drawn with Words" and "Love is All I Need: a tragic love story" he is fully prepared to continue his writing career as long as his muse speaks to him.