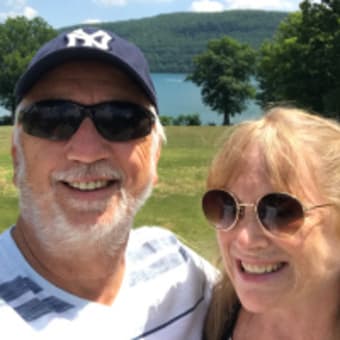 Russ has an intuitive gift for creating captivatingly warm and rich characters. His stories read fast, leaving you wanting more. So much so, you may just be calling in sick to finish them! A frequent lecturer in Biblical Prophecy, Russ brings a lifetime of technical expertise to a story he believes may very well be the substance of tomorrow's headlines. "On the Edge of Time," written with Steve Mamchak, is in two captivating parts that are both Biblically accurate as well as dramatically powerful, hitting at the essence of our lives now and an apocalyptic future that may soon be upon us.

Russ's new award-winning series HIDDEN THRONES features Jack Bennett, a consultant for the FBI's new paranormal division. Jack has an unusual gift that pits him against powerful dark forces threatening to take over planet earth. In this series, the author gives us a peek behind the curtain and reveals the origin of paranormal activity.

In the 1960s and '70s, Russ Scalzo was the frontman for The Hallmarks, a band popular along the Jersey Shore, and scored a contract with Mercury Records. After a life-changing decision, he went from performing in bars to ministering in churches and touring the country with his band, Saved By Grace. Russ has written too many songs to count, including music for several original musicals. He is the co-founder and president of a non-profit Christian theater company based in New Jersey, Lighthouse Stage Productions.

Russ currently resides on the Jersey Shore with his wife of 40+ years. He has three beautiful daughters and is a grandfather of five.