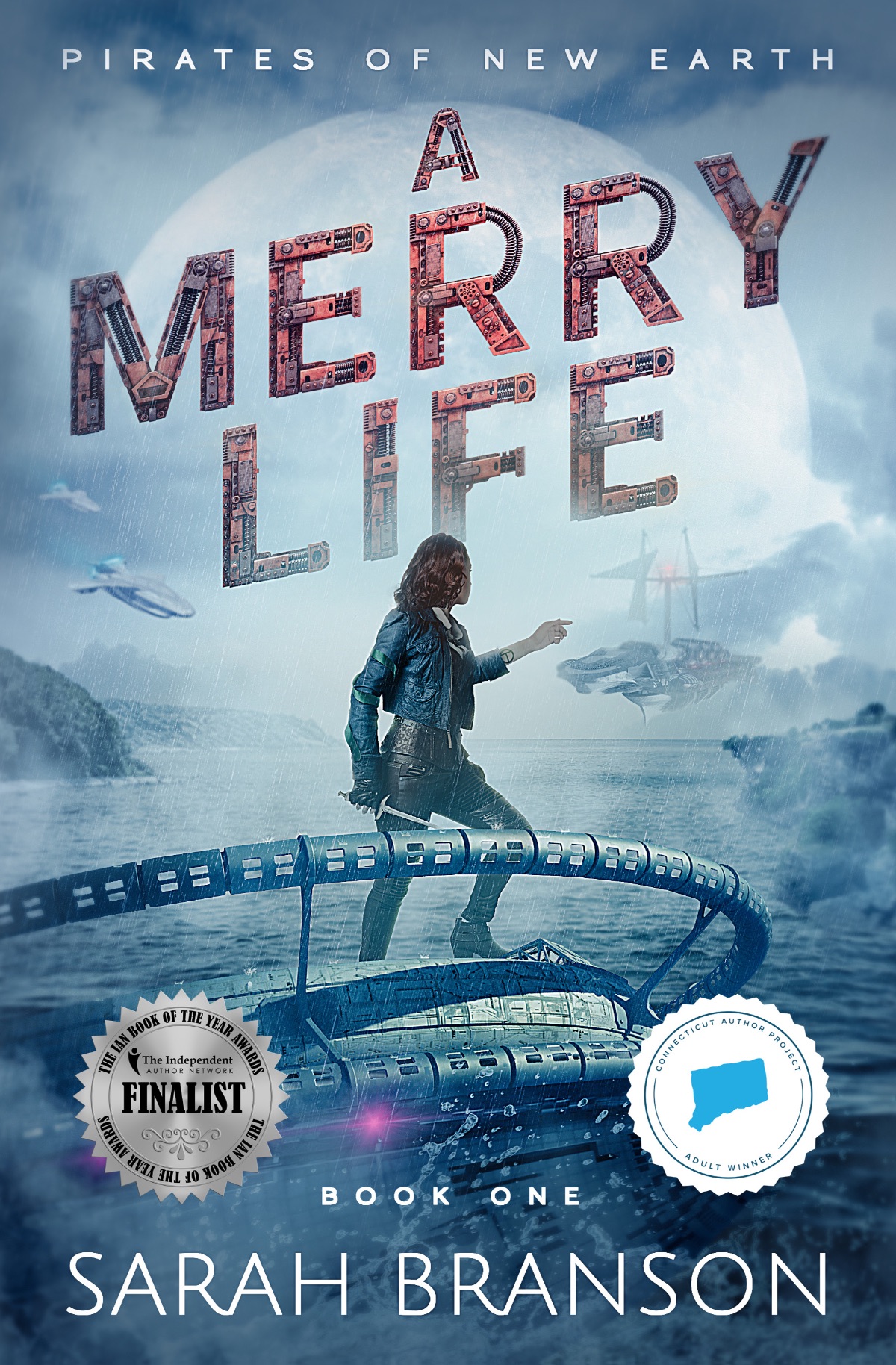 Kat Wallace is on a mission. After escaping tortuous enslavement, she sets her sights on ending the human trafficking that has flourished in 24th century Earth.

Adopted by the leader of the pirate nation of Bosch, Kat Wallace is determined to prove herself as a member of the Bosch Pirate Force and use her skills to avenge her enslavement and free other thralls.

But unexpected love and a test of loyalty threaten to rob her of what she wants most: a home.

““A Merry Life is a fantastically fast-paced page-turner, with a dark streak. From the very first paragraph, Sarah Branson plunges readers into the action and doesn’t let us catch our breath until the very last page. We follow the adventures of Kat Wallace, Branson’s bad-ass heroine, as she escapes from slavery and is recruited to become a swashbuckling, skyborne soldier in the Bosch Pirate Force. Once you pick up A Merry Life, you won’t be able to put it down!”“

—
Debby Applegate, Author of Madam: The Biography of Polly Adler, Icon of the Jazz Age

“Swashbuckling, vengeance and heart — all wrapped up in one heck of a strong woman. Kat Wallace is a Thrall, a slave, to an unbelievably rich and powerful man. After three failed escape attempts, she’s taken into the care of a Pirate Captain, and given the chance to start to live her life. She learns how to be patient, how to stay her hand when the opportunity for revenge presents itself at an unexpected moment. As Kat’s story unfolds, your heart will break along with hers; you’ll feel her joy and her terror. I sincerely look forward to the next instalment in Kat’s story.“

““In A Merry Life, Sarah Branson creates a powerful female character. Hers is a story of trauma, survival, recovery, and above all empowerment. The character writing is my favorite aspect of this book. Kat Wallace is amazing … strong-willed and daring. I happily rate this book 4 out of 4 stars.”“

“In a world where our planet has been ravaged – by flooding, pandemics and the excesses of humanity – it’s little surprise evil flourishes. In the New Earth Sarah Branson creates in her debut novel, “A Merry Life,” slavery thrives. An addictive drug known as Glitter is all the rage. The line between the haves and have-nots is never sharper.

But New Earth is not a dystopia void of hope – it’s a backdrop for adventure and love and revenge where Branson brings the story of Kat Wallace to life. And oh, what a story! Branson grips the reader from Kat’s opening sentence – “Dying is not an option” – as her heroine makes a daring escape from the enslavement and torture on Bellcoast she suffered for years at the hands of Him. We are swept up immediately into this brave woman’s incredible journey from thrall to pirate.

Yes, pirate. Once stowaway Kat is befriended by an unlikely mentor, the head of the Bosch nation of pirates, her life is set on an entirely different course. In this roller coaster of a book, we follow Kat’s transformation from a mistrustful, almost feral young woman to a skillful warrior and rising leader in the Bosch Pirate Force, fearless as she leads missions to extract targets or shrewdly negotiating Glitter transactions.

The notions of trust and teamwork come slowly to Kat, who struggles to tame her temper and control her impulsive nature. Branson masterfully explores the inner and often conflicting tensions that motivate Kat, who simultaneously craves love, acceptance and belonging – yet is willing to risk her happiness, family and home in the name of revenge.

Kat’s twin desires – to revenge the unspeakable wrongs done to her and to put an end to enslavement – are the north star that guides her with single-minded determination through this fast-paced first book in the Pirates of New Earth series. Branson has created a complex and fierce heroine in Kat, and an intriguing backdrop for her adventures among the island nations of New Earth.

As I finished the book, I am reminded of the words of Tennessee Williams when I think of Kat Wallace: “The world is violent and mercurial – it will have its way with you. We are saved only by love….” I am already counting the days until book two appears.“

“This book absolutely rocks. Our heroine, Kat Wallace, isn’t just a supremely courageous heroine – she’s thoughtful and interesting and one can’t help but root for her as she tries to make sense of the characters she encounters in her incredible journey. Branson has done an incredible job painting a vivid portrait of New Earth, while simultaneously creating key plot twists to keep one charging ahead. Can’t wait for more!“

“I enjoy a good sci fi/futuristic. Which is why I really liked this book. Instantly, I was drawn into the story as well as the world that author, Sarah built. Kat is the type of heroine that me and other readers need. She is a fighter who is willing to fight for what she believes in no matter how hard the situation gets.

Yet, Kat is not the only character that I was drawn to. The rest of the Bosch Pirate Force are engaging and enjoyable characters as well. It really helps when the characters are very engaging as it makes the story that more intriguing. Which I found myself reading several chapters at a time. I look forward to reading book two. A Merry Life is a delight read!“

—
Goodreads reviewer Cheryl
Join The LitRing Tribe
I am a(n):
We use cookies on our website to give you the most relevant experience by remembering your preferences and repeat visits. By clicking “Accept All”, you consent to the use of ALL the cookies. However, you may visit "Cookie Settings" to provide a controlled consent.
Cookie SettingsAccept All
Manage consent