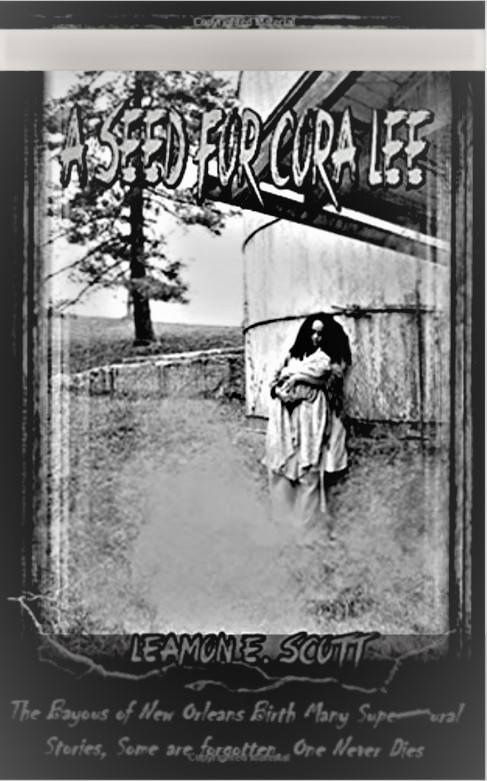 A Seed for Cora Lee

A wet dark early morning in a Louisiana bayou; the couple in their small, isolated cabin are about to experience the beginning of life altering events. Cora Lee Baptiste, a beautiful Creole woman with the hope of growing a family with her loving husband Leon, screams out in her sleep during a recurrent nightmare. Leon awakens her and they briefly discuss her nightmare that someone is taking their baby. After consoling her, they make love, hoping to conceive again and finally carry to term. Leon gets ready to leave for work as a shrimper; Cora Lee prepares his lunch.

On the highway heading north, there’s a violent crash of the New Orleans police car transporting a psychotic triple-murderer to a psychiatric facility. The escaping prisoner, Colin Cyrus, kills one of the officers and is determinately on the run. Slogging through the wet soggy bayou terrain, he sees the light from a cabin and approaches. Crashing through the door, the maniacally demon-possessed Colin brutally rapes Cora Lee and kills Leon, who had returned home to retrieve his lunch.

A pursuing Detective Raleigh Spencer has tracked him there, and upon entering the cabin is forced to shoot Colin dead. Life for the traumatized Cora Lee will become more desperate and complicated, for the r ape, or their morning lovemaking, has resulted in a pregnancy. However, the baby Cora Lee always wanted may not be hers to keep, as Colin’s pact to deliver a son to the dark side has spun a web of evil that foreshadows a final coming event. New Orleans has been thrust into a quagmire of deadly encounters with the supernatural, as well as complicated multi-faceted side stories. Now, to save Cora Lee, a determined and guilt-ridden Detective Spencer must decipher the cryptic message being sent from beyond the grave.

However, unbeknownst to all, a time and reality shift has occurred and what seems to be is not; or is it? Were her nightmares a precursor to the present or a layered parallel future that is transformative and fluid? Cora Lee awakes in the hospital after she has given birth to a son in the cabin, where Det. Spencer has battled the Devil. Yet, she now sees her abdomen nine months swollen with a baby. And just whose baby does she carry?