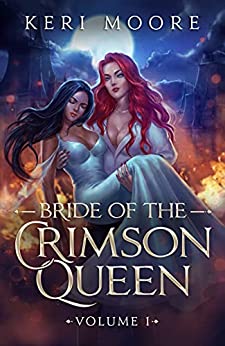 Bride of the Crimson Queen

Kami, a novice fire sorceress, never wanted to fight. She already lost her mother, the great fire sorceress Arkemi, to the forces of darkness. While the world sees a fallen hero, Kami is riddled with regret and bitterness—struggling to understand what she died for.

Although heroes may persevere, darkness never truly fades; it merely waits for a chance to return. The Crimson Queen, a powerful vampire that once laid claim to Kami’s town, Fortuna, is back. Struck with fear, the townspeople prepare to evacuate. Alice, Kami’s best friend and vampire hunter, urges her to follow suit. She warns her that the Queen’s power is too great for them to challenge on their own. The Crimson Queen’s formidable power is also augmented by the legions of minions who assist her in her dirty business. Kami refuses, unable to leave her home—the last remaining link she has to her late mother.

But danger travels fast. Alice is bitten by one of the Queen’s vampire minions. Unless that vampire is destroyed within seven days, Alice will become their mindless servant. Unwilling to lose someone else she loves, Kami decides to join a group of hunters hired by the town’s Mayor to eradicate the Queen for good.

These minions have powers Kami’s never seen before and the skills to match it. Will her unwavering determination and raw strength be enough to save her friend and town in the process? She may have less than seven days to find out.