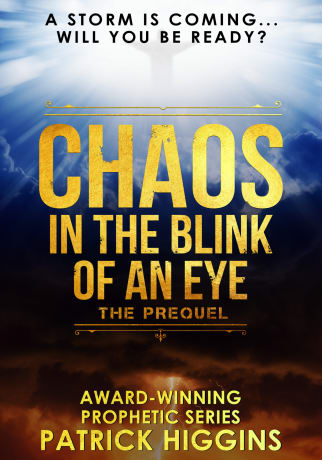 Chaos In The Blink Of An Eye

Chaos In The Blink Of An Eye

The "CHAOS" in our present world was documented long ago in this end times series, which won the Radiqx Press Spirit-Filled Fiction Award of Excellence. More than 7,000 positive reviews have already been posted (on the first 6 installments), on Amazon, Book Bub and Goodreads...and counting! Have you read it yet? If not, what are you waiting for? Download your copy now!

It was the weekend before Thanksgiving. More than 100,000 fans were jammed inside Michigan Stadium, on their feet, to witness a heated football rivalry that had spanned more than 100 years. As the football was kicked into the snow-filled sky, they were about to get the shock of their lives, as long-foretold Bible prophecy came to pass before their very eyes, causing many to vanish into thin air without a trace.

But what they soon realized was that it reached far beyond Michigan Stadium. Chaos of unimaginable proportions ensued worldwide. Shock, fear and panic filled each heart and mind. It was just the beginning of things to come, as life as humanity had known it was forever changed in the blink of an eye...

The first seven installments of this must-read series are now available. Once completed, there will be 12 installments.