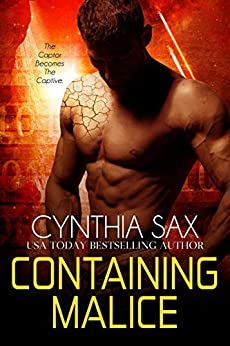 This tormented cyborg craves vengeance…and her.
***
Malice, a C Model cyborg, has spent his long lifespan enslaved by the Humanoid Alliance. His cruel manufacturers have hurt him in all the ways a male could be hurt.

His enemy has now added a new weapon to their arsenal—a tiny human medic with soft hands and a delectable scent. She experiments on him multiple times a shift, delivering pain…and frustration.

He wants her. He also seeks retribution.

Once Malice frees himself, he plans to achieve both of his goals, taking Medic Illona captive and ending her research…permanently.

Illona is as much a prisoner as the cyborgs she experiments on. Since her arrival at the Human Alliance’s secret laboratory, she has carefully, stealthily, crafted a plot to free her test subjects. To conceal her covert activities, the medic has been forced to harm beings rather than heal them.

The being she has damaged the most is also the cyborg she fiercely desires— Malice, a huge, gray-skinned, blue-eyed C Model with massive hands and a voice deeper than space. He hates her, has good reason to do so, and, when he’s freed, there’s a high probability he’ll kill her.

Illona will take that risk to ensure he survives.