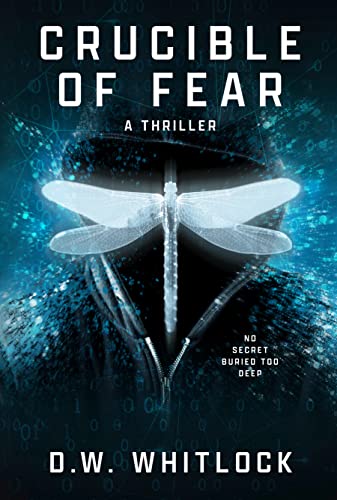 Crucible of Fear: A Thriller

A man's life in chaos. His young daughter at risk. What is a pound of flesh worth?

Since the death of his wife, advertising executive Dante Ellis has struggled to rebuild a stable life for himself and his young daughter, Abigail. Their idyllic world is plunged into a harrowing nightmare after he's targeted by a group of ruthless hackers known only as Dark Messiah. Soon after, a highly advanced dragonfly drone flits through the shadows, watching his every move. Like a harbinger of evil, terrible things happen whenever it appears.

Dante soon discovers no part of his life is too sacred to be used against him, no secret buried too deep. What began as a veiled threat rapidly descends into a desperate conflict for everything he holds dear.

From the glittering streets of Hollywood to the shadowy digital underworld, this riveting, fast-paced, technothriller shows what might happen if everyday technology was used to turn our darkest secrets into our greatest fears.

A word of warning: You may never look at dragonflies the same way again.

Fans of Michael Crichton and Dean Koontz with a dash of Stephen King will enjoy this non-stop thrill ride through the dark world of modern cybercrime.

““This razor-sharp, tech-laden tale proves both convincing and exhilarating.”“

““CRUCIBLE OF FEAR stuck with me long after I finished reading, and I highly recommend picking it up and reading it for yourself. You will not be disappointed!”“

““This deliciously suspenseful novel heralds a major new talent from a masterful storyteller. With its jam-packed plot and dramatic action, this techno-thriller debut novel is sure to appear on bestseller lists. Pure, reading pleasure at its finest!”“

—
Sharon Umbaugh, The Writer's Reader
Join The LitRing Tribe
I am a(n):
We use cookies on our website to give you the most relevant experience by remembering your preferences and repeat visits. By clicking “Accept All”, you consent to the use of ALL the cookies. However, you may visit "Cookie Settings" to provide a controlled consent.
Cookie SettingsAccept All
Manage consent