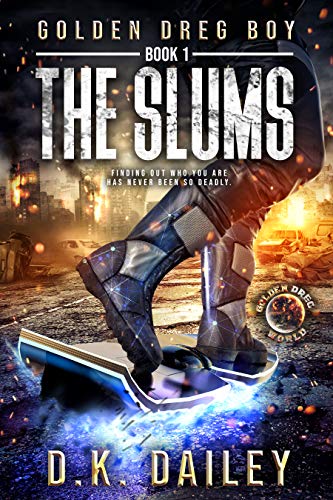 Seventeen-year-old Kade Shaw is a privileged Golden. Kade and his family have the best money can buy, living in the wealthiest area of Sector One. A bored rich kid, Kade’s tired of his mundane life, and regularly sneaks out to the skate park and the slums to take risks and feel alive—maybe even kiss a Dreg girl or two. Until one night at an illegal party, everything goes horribly wrong.

When the cops accuse Kade of falsifying his Golden status, an offense that carries a death sentence, he is forced to question his true heritage after his powerful parents won’t save him. Then, on the eve of his execution, he’s rescued by a guerilla Dreg group—but why? What do they want from him? As he lives with them in squalor, trained in raiding for food, fighting, and how to survive, he slowly gains respect for the Dreg people, seeing them as more than “other”, confusing the age-old lines of good and bad. But despite his infatuation with Saya, a beautiful Dreg girl, Kade still wants his old life back.

In the brewing deadly war between rich and the poor, Kade must make a choice between fighting for his Golden status or helping the Dregs who saved his life. Golden or Dreg?