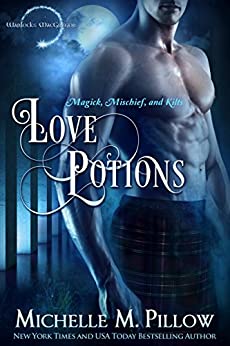 Erik MacGregor is from a line of ancient (and mischievous) Scottish warlocks. He isn’t looking for love. After centuries of bachelorhood, it’s not even a consideration… until he moves in next door to Lydia Barratt. It’s clear the beauty wants nothing to do with him, but he’s drawn to her and determined to win her over.

The last thing Lydia needs is an alpha male type meddling in her private life. Just because he’s gorgeous, wealthy, and totally rocks a kilt doesn’t mean she’s going to fall for his seductive charms.

Humans aren't supposed to know about his family's magic or the fact he's a cat shifter. It's better if mortals don't know the paranormal exists. But when a family prank goes terribly wrong, causing Erik to succumb to a love potion, Lydia becomes the target of his sudden and embarrassingly obsessive behavior.

They’ll have to find a way to pull Erik out of the spell fast when it becomes clear that Lydia has more than a lovesick warlock to worry about.

5 Stars! "RECOMMENDED READ! "Peeps...this is the FUNNIEST book that I've read this year. I mean rolling on the couch, tears streaming, almost wetting my pants funny. The dialogue between every character is funny and perfect. You will have a smile on your face from the first page to the last page." Harlie's Books Review