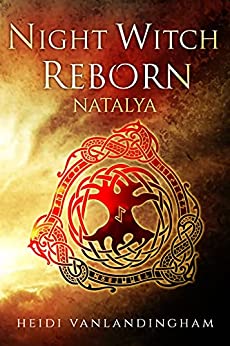 A Night Witch battles for a second chance at life. A Resistance Soldier fights for humanity. Are they strong enough to change the course of war?

Natalya Volkov’s dream is to fly, but when she’s killed in a plane crash defending Mother Russia, the Norse goddess Freyja gives her a second chance at life—for a price. For immortality, she must hunt down the most powerful man in Europe or give up the man she loves.

Romani-Jew, Mikhail Abramovich has known hardship. He escaped a Nazi camp, became a Resistance soldier, and the love of his life died in his arms. Yet, when Natalya miraculously returns to life; he is plunged into a world that is no longer black and white.

Is the hunt for Hitler and immortality worth giving up everything they have ever known and loved?

Night Witch Reborn: Natalya is the first novel in the electrifying Flight of the Night Witches series. If you like meddling goddesses and tension-filled plots effortlessly blended with humor and romance, then you will like Heidi Vanlandingham’s unputdownable WWII paranormal historical thriller.