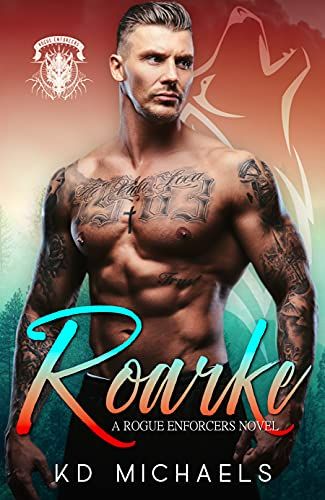 Roarke Cunningham is the head of his small ragtag pack, along with this sister who refuses the Alpha status. A small pack of renegades who ride Harley’s, rescues damsels in distress, kick a little tail and enjoy the screams their women shout in ecstasy when they come calling. On the side, Roarke assists with the Rouge Enforcers to deal with those who do wrong in the shifter world.

Sapphire Butler is the daughter of a MC President, her brother is an enforcer, and a dangerous one at that. Her mother got her out of the lifestyle when she was fifteen after a failed kidnapping attempt resulted in disaster. Now, Sapphire spends her days on a task force aimed at human trafficking to bring the scums of the earth to justice.

Montana has had a surge in kidnappings lately. The kidnapper’s mistake is coming to Wolfe Creek and taking several young girls from a local high school. Their biggest mistake was taking a human girl. Now Roarke must work with Sapphire, who is a human, to find the missing girls before it’s too late.

Roarke and his wolf fight their attraction to Sapphire, thanks to her snark. Sapphire thinks Roarke is an overgrown ape who needs to learn manners. Wil these two be able to put their hotter than hell attraction to each other aside before it’s too late for these girls or will they get burnt, by both the fire they emit and the kidnappers?

“Looking for a hot and spicy read you can devour? Look not further. Drama, excitement, and well… I’m not saying anymore to spoil. Pick it up today.“