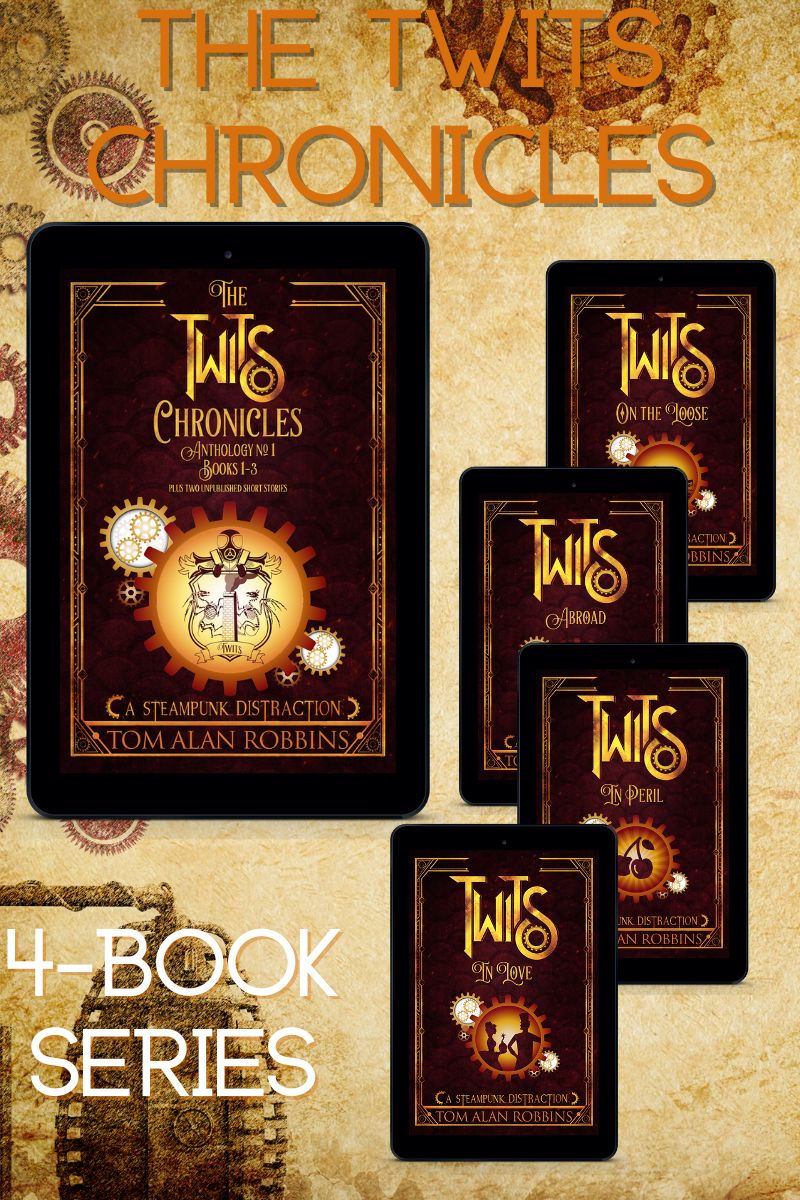 Twits in Love: A Steampunk Distraction

"Alcohol is like the cousin that owes you money. It promises everything and delivers nothing."
Cyril Chippington-Smythe, the world's richest man, awakens from a drunken stupor to find that he may have engaged himself to the horrifyingly toothy Alice Witherspoon. His mechanical manservant, Bentley, concocts a plot to free his master from any possible entanglement, but Alice has more than matrimony on her mind and may end up destroying civilization as we know it.

““The Twits Chronicles are hilarious, blessed with truly exceptional dialogue. Steampunk dystopia meets Oscar Wildean wit in these books. I found myself laughing out loud on numerous occasions–and that’s not something I often do while reading.“

—
Nick Sullivan, author of The Deep Series and Zombie Bigfoot.

“Delightful! A frothy frappe of P.G. Wodehouse and steam-punk. If you’re the sort who reads blurbs before reading the book, stop it. Stop it right now. Read TWITS IN LOVE and have a good time. These days we can all use a bit more of a good time.“

“I haven’t enjoyed the company of such eccentric characters since A Confederacy of Dunces, and Tom Alan Robbins has managed to place them in the stylized world of Oscar Wilde. A really unique journey.“

“Tom Alan Robbins’ Twits stories are hilarious, thought provoking and mind bending. His juicy turns of phrase will stick in your ear like a catchy song.“

“Tom is the most talented, delicious writer. Do yourself a favor, and immerse yourself in the fabulous world of TWITS!“

“The best satire is hilarious and engaging even to one who is not familiar with the antecedent. I have never read Wodehouse, whose work is elegantly and brilliantly roasted here by Mr. Robbins, but I don’t need to. Twits is comic genius in its own right. I believe it is brilliant enough to belong to that rare category of literature, like Don Quixote, in which the satire is better known than the genre on which it is based.

It would be a disservice, in fact, to limit Twits to the category of satire. It is humor fiction entirely in its own shelf, “steampunk” notwithstanding. Mr. Robbins world inhabits the past, present and future simultaneously. The current and urgent theme of economic inequality is present on every page, and the vividness and completeness of the characters is on a par with the those of the greatest comic authors.

Which brings me to the novel’s central character, the endlessly appealing Cyril Chippington-Smythe. One of the great achievements of the story’s structure, is that Cyril is both emblematic of everything that is ridiculous about his upper crust milieu, and also entirely free of any of its twitty residue. Even when recovering from a boozy night, Cyril is unfailingly fresh as as a daisy. He belongs, with Jack Worthington, to that family of literary heroes who are never made dull by the decadence of the world they inhabit. One wants to be his best friend, and to meet him for tea every afternoon.

“I am an avid, insatiable reader, and I believe that quality and originality should be applauded. Well, this deserves a standing ovation.
There are not enough positive adjectives in a thesaurus to tell you how much I loved this.
Most of all, it is a hoot. If you are looking for a fun read – you’ve found it. Robbins is a genius. He has somehow been able to mash-up turn of the century British snobbery with sci-fi futurism; well-to-do ridiculousness with steampunk sensibility. It is exactly as described: A Steampunk Distraction.
And it is done so effortlessly. Each character may be a familiar stereotype, (the idle rich buffoon, the clever [if mechanical] butler, the useless bored friends, the witty, charming but conniving girlfriend, etc.) but each one is so well crafted, so well fleshed-out, and so beautifully written that it hard not to root for each helpless twit. The dialogue is priceless. If you just heisted the dialogue it would be a prize-winning play.
Robbins is able to be inane and over-the-top while never once taking you out of the world’s reality. And the world he has created is so cool. When I finished it (in one sitting), I was in awe. I was like “How’d he do that?”
It was just so much fun. So silly. So wonderful. Read it. You will not be disappointed.“

—
John E. Brady, Amazon Reviewer
Join The LitRing Tribe
I am a(n):
We use cookies on our website to give you the most relevant experience by remembering your preferences and repeat visits. By clicking “Accept All”, you consent to the use of ALL the cookies. However, you may visit "Cookie Settings" to provide a controlled consent.
Cookie SettingsAccept All
Manage consent