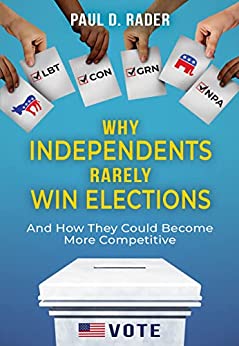 And How They Could Become More Competitive

How can independent political candidates become more competitive in elections?

A significant proportion of Americans are dissatisfied with the country’s two-party system. They often respond with negative opinions of both the Republican and Democratic Parties. Many of them identify as independents and even more of them want a third major political party. Yet elected offices across the board are routinely dominated by Republicans and Democrats while independents take only a small fraction of what is available. Why is there such an enormous disparity between what the public wants and who wins public office?

Why Independents (Rarely) Win Elections will give you an in-depth look at various facets of independent politics in America. The book shows how a complex web of factors combine to wreak havoc on the hopes of independent candidates and political operatives in their quest to win elections.

Paul D. Rader has hands-on knowledge of the political process and both educational and professional experience with research and analysis on various facets of political science. These aspects include election trends, the function of campaigns, the history of political institutions, government structure, public policy, and more. Now he wants to share his knowledge with you, whether you consider yourself an independent or not.

This book is for anyone who:
-Wants to have a better understanding of why America’s two-party system functions the way it does.
-Is concerned about the state of political competitiveness in this country.
-Is frustrated with the function of their government.
-Wants to learn the reasons that independent candidates struggle to win and what actionable ways they could potentially improve their chances of success.

Get Why Independents Rarely Win Elections today and learn how independent candidates, from presidential to local elections, could become more viable contenders.