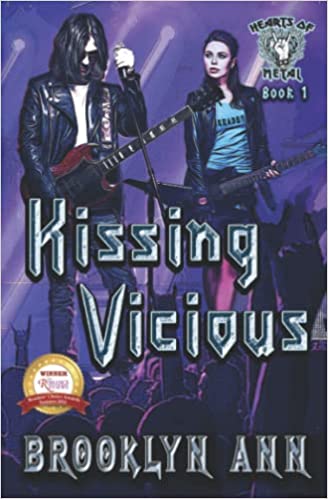 It's hard to be one of the guys when he makes her feel like such a girl.

When Kinley Black becomes a roadie for Viciöus, beginning a foray into the unglamorous, male-dominated world of heavy metal, she won't escape with her pride or heart intact.

Ever since Kinley Black's metal band broke up, bringing her back to only being a co-owner of a metal fan site, she's been dying to get back into the music industry. The opportunity arrives when her interview with Quinn Mayne, lead singer of her favorite band, Viciöus, goes off the rails. If she can beat up a pervy roadie, she can have his job. Kinley has no problem with hard work or being one of the guys. But fighting her attraction to Quinn is a bigger challenge.

Quinn is furious with his road manager for insisting they hire Kinley. Taking a beautiful woman on the road was like dangling meat above a pack of feral hounds. Despite his reluctance, he can't help being impressed by his new roadie's strength and determination any more than he can suppress his urge to protect her when a crewmember's hostility escalates. As Viciöus's tour across the country progresses, Quinn's fury and frustration fall away, only to be replaced with a burning desire, with the promise of something deeper.

"I really enjoyed this book. It's one of those that hit all my happy buttons and allowed me to live out a fantasy through the words of the author. I immediately remembered being in middle school and waiting for the mailman to deliver the next issue of Tiger Beat magazine so I could pull out whatever poster was included, hoping it was someone I liked so I could tape it to the walls of my bedroom. I could relate to having a rock star crush but in this book, we see the fantasy come true." - Smexy Books