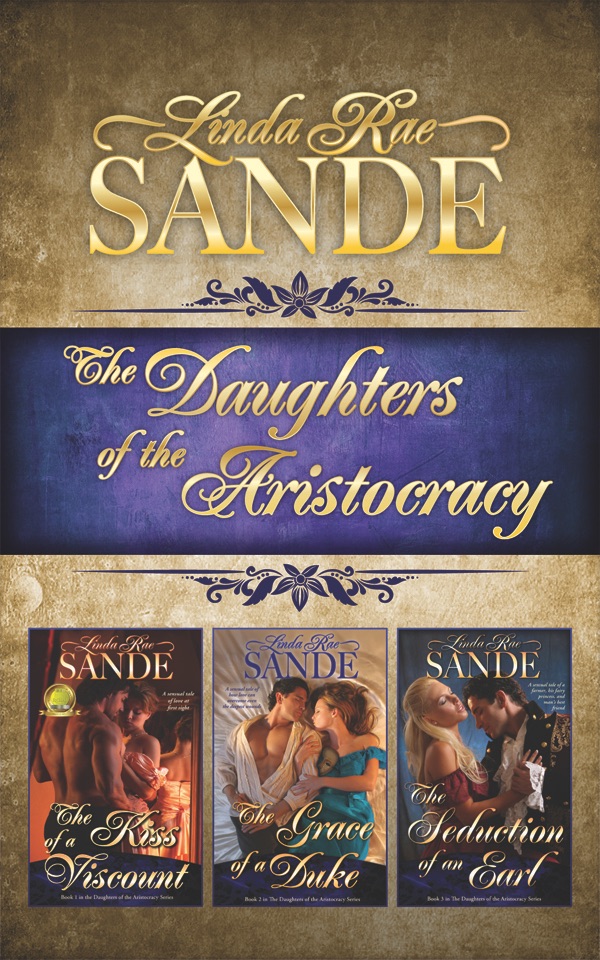 The Daughters of the Aristocracy: Boxed Set

In THE KISS OF A VISCOUNT, George-Bennett Jones finds himself in love with Lady Elizabeth. His competition for her hand is the blond, blue-eyed Gabriel Wellingham. An earl, he's determined to gain the hand of the daughter of his most powerful political opposite, David Carlington, Marquess of Morganfield. George has been tutored by his mistress, though, and employs the lessons he has learned in an attempt to gain the upper hand in his quest for Elizabeth's hand.

Lady Charlotte has to take matters into her own hands when she travels to Wisborough Oaks to marry Joshua Wainwright in THE GRACE OF A DUKE. The newly-minted Duke of Chichester is still recovering from burns and has no intention of subjecting a woman to what most in the ton refer to as "His Grace with half a face". When it appears someone is trying to kill him, Joshua sends his estate manager to London to find out who would benefit from his death. The appearance of another suitor for Charlotte's hand, an earl she has known since childhood, has the duke realizing he may have missed his opportunity to marry the perfect duchess.

In THE SEDUCTION OF AN EARL, Lady Hannah agrees to marry Henry Forster, Earl of Gisborn, despite knowing he has a son with his childhood sweetheart—and still loves her. Hannah has her dog, though, and merely wants a child of her own to love. An inventor and farmer, Henry is pinning the future of his earldom on a prognostication claiming the upcoming growing season will be too cold and rainy to grow crops. Determined to modernize, and to save a maid from a rake, Henry discovers Hannah and Harold MacDuff are rather resourceful and intelligent. It will take man's best friend to teach Henry a thing or two about women.